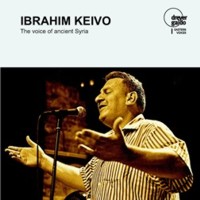 Ibrahim Keivo - The beholder of the ancient Syrian musical heritage
Ibrahim Keivo was born in 1966 in a small village in the region of Hassakeh, in Northern Syria. Son of an Armenian family who survived the genocide, he was raised in the land where ancient Syrian (Al-Jezireh, meaning ''the island''), Mesopotamian and Western Asian cultures meet and create one of the richest and most diverse societies in the region, in term of practiced religions, spoken languages and dialects, and verbal heritage.

Since his early age, Keivo's mother introduced him to the Armenian hymns she carried with her from her motherland. She has also played a major role in familiarizing him with the Turkish, Kurdish and Mardalli (the Arabic dialect of Mardin) singing traditions of the region of Mardin – Southeastern Turkey – where many Armenians have stopped before finding shelter in other places all around the world.
Landing in Northern Syria brought other cultures to the family; in addition to the Bedouin tradition, Keivo found great inspiration in the ancient civilizations and religions that remained alive in this region: the Assyrian which main language is the Aramaic, the Syriac language and Christianity, and the Yezidism, an ancient Kurdish religion which most important holy place is Lalish temple in Mosul (old Nineveh in Iraq).
Jumana Al-Yasiri